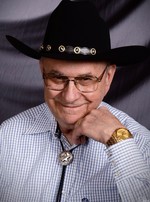 Elmer Wayne Gearner, age 84, of DeSoto, Texas passed away July 13, 2019. He was born May 8, 1935 in Winnsboro, Texas to the late Elmer and Marie Gearner. They preceded him in death in 1994 and 2008, respectively. His younger brother, Monty Gearner, also preceded Wayne, having passed away in July 2018.
Wayne was married to Peggy Bass for 40 years until her death in January 1996.
He married Carol Ann Robinson in 2000 and they would have celebrated 19 years of marriage in August.

Wayne graduated from Winnsboro High School in 1953. He soon moved to Dallas to work as a truck driver for a printing ink company in Dallas, Sinclair & Valentine.
He was soon moved into the lab of the company to study as an apprentice and eventually became the head chemist for the company. During the early 60’s, the company’s biggest client, Frito Lay, began moving from paper packaging for their products to plastic packaging. A new and different kind of ink had to be developed to adhere to the new packaging. Wayne spearheaded the research and development for the new ink. He worked in the printing ink business until his retirement in 2008.

Wayne had many hobbies, “muscle cars”, CB radios (in the 70’s), Ham radio, sound production, firearms, airplanes, photography, computers, chronicling family history and raising his beloved cockatiels, which he had done since the mid-90’s. He also enjoyed hunting and fishing.

Wayne was a Christian, having placed his faith in Jesus Christ as a young boy, and later rededicated his life to the Lord in 1970. He was a member of Hampton Road Baptist Church in De Soto, Texas.

This obituary is protected by copyright by Winnsboro. Proudly Serving the Communities of Wood County, Franklin County, Hopkins County, Winnsboro, and Sulphur Springs. Winnsboro is located in the state of Texas, United States.