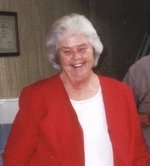 Mollie Ellis, age 83 of Winnsboro, passed away on Thursday, June 20th, 2019 in her home surrounded by her loving family. She was born on February 28th, 1936 in Yantis to the late Leonard and Esther Finn Pruden.
Mollie attended Texas Women’s University, where she received a bachelor’s in education and a certification to teach.
After retiring from teaching, Mollie and her husband, Francis moved to East Texas, residing in Winnsboro where she was a member of Cypress Baptist Church. She was also a member of the Order of The Eastern Star.
She was preceded in death by parents and brothers, Leonard "Jack" Pruden and Marvin "Pud" Pruden.
She is survived by, husband of 63 years, Francis Ellis; son, Robert Charles Ellis; daughter, Nancy Lavon Ellis; and brothers, Raymond "Bo" Pruden of Odessa and Ted Pruden.
Visitation will be held on Sunday, June 23rd, 2019 from 1:00 pm to 2:00 pm at Beaty Funeral Home-Winnsboro 816 W. Broadway Winnsboro, TX 75494 with a funeral service to follow.
In lieu of flowers, memorial donations can be made to the Eastern Star, P.O. Box 250 Winnsboro, Texas 75494.

This obituary is protected by copyright by Winnsboro. Proudly Serving the Communities of Wood County, Franklin County, Hopkins County, Winnsboro, and Sulphur Springs. Winnsboro is located in the state of Texas, United States.